You are here: Home › Joacim Larsen

Gallery of the sandcast CB750

Wow, that took a lot longer than we expected. Both Ole and I have had a somewhat hectic spring so far and the updates to the site have suffered. The good news it that we have the image gallery of the sandcast 1969 Honda CB750 up on the site now! Go to the museum page or click here to see it! 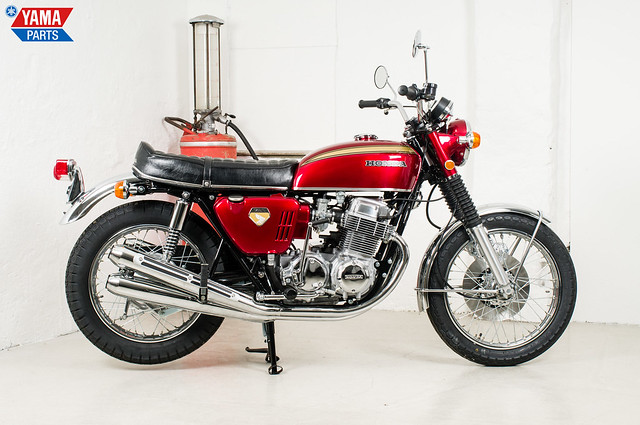 We have a new parts list uploaded to the site. This time it’s for the YL1, since we have one in the collection we figured we’d upload the parts list.

As always, you can view it using the link below (or download it for personal use if you right click it), or click through to the Manuals section to view all manuals.

First of all: happy new year!

We usually have a couple of motorcycles waiting to be put back together and another few waiting to get disassembled so we can start the restoration. Since we disassemble a bike in one go, apart from the engine block, we figured we’d do a video showing it from start to finish.

To do this we set up the camera on a tripod and had it take a picture every 10 seconds. It happened to be an AS2J we disassembled this time but the process and steps are the same for all models. Luckily this bike was in relatively good condition to start with so the disassembly went without any trouble.

Merry Christmas from the Yamaparts workshop. The elves are hard at work

A year ago we contacted Vic at worldmotorcycles.com about restoring a sandcast 1969 Honda CB750 for us. You can see our original post about it here. It arrived in it’s shipping crate a few weeks back and had to clear customs. This is our first “unboxing”. Vic’s done a great job with it!

The very earliest CB750’s that were produced were this sandcast version: the crankcase was created using a sand mold. After engine number E1007415 the engines were die cast instead. Couple this with the fact that the early chains were to weak for the engine which caused them to shatter the crankcase and you have very few of these about 7000 bikes produced left in existence with their original sandcast crankcase. This is one of them.

Mark Haycock wrote in his book about the CB750: “This is properly identified as the CB750. Not K0 or K1, just CB750. This fact seems to cause a lot of confusion throughout the world. Perhaps it would be wise to use the title ‘pre-K1 CB750′”, so we’ve chosen to do just that. K0 was coined in retrospect and not an official designation.

The engine and frame serial are both around 2500 so it even has the horn on the left side behind the front brake hose, this was changed to the right at frame number 1003951 since the hose would foul the horn. We’ve taken the bike to its home in the museum but haven’t snapped a full gallery of it yet, until then: you can enjoy these snapshots and our unboxing video